In partnership with In partnership with Factory Two and Girls Rock Flint!, Title Track co-facilitated “RiverQuest”, a creative empowerment and ecological education project for 20+ Flint youth in July 2019. Highlights of the week included canoe trips on the Flint and Saginaw Rivers with indigenous leaders and youth-led songwriting and recording projects in the studio and Factory Two maker space inspired by the experiences on the water in the natural world. Students were guided in experiential education in the areas of ecology and environmental protection as well as songwriting, production and performance art.

The project culminated in a widely promoted professional production that featured new material unveiled to the public for the first time. The creative facilitation of RiverQuest was modeled closely after “The Quest”, a celebrated youth music program Seth Bernard’s Earthwork Music Collective spearheaded with SEEDS in collaboration with the American Folklife Center, the Library of Congress, and Sleeping Bear Dunes National Lakeshore. (see below for more of that history)

In addition to being one of the longest-running all-ages venues in the country, Flint Local 432 is a program of Red Ink Flint, a youth focused non-profit that provides access to the arts and other activities in downtown Flint. 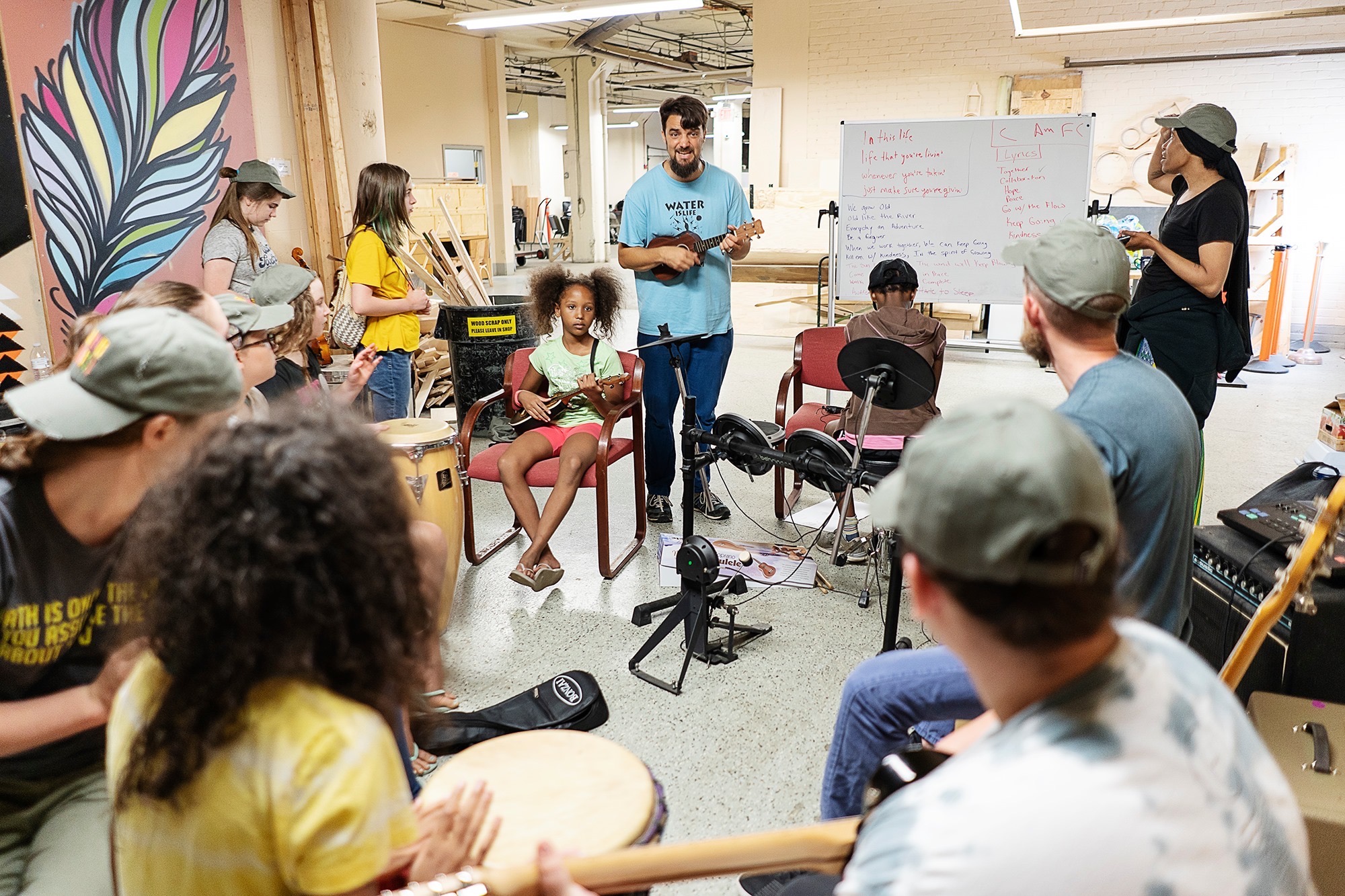 ”Everyone has a story, Made into song. And they’ll live on.”

from “The Presto Machine” written
by Forest Area Schools students

“What a place Traverse City is a-coming to be!” Retired lumberjack Lester Wells once sang these words while sitting with his aging buddies in Launtner’s Tavern (now Union Street Station—still a bar with live music) in downtown Traverse City, Michigan. The folklorist Alan Lomax recorded the song by cutting a 12-inch disc on the spot with his Presto instantaneous disc recorder. The year was 1938, and Lomax—then a 23-year-old Assistant in Charge at the Archive of Folk-Song—was in the midst of a 10- week folk music collecting trip of the “Lakes States,” gathering examples of Michigan’s rich trove of traditional song to enrich the Archive’s holdings at the Library of Congress.

Seventy-five years later, a new generation has discovered Lomax’s recordings and made them their own. The Quest—A Celebration of Community, was an innovative after-school arts program serving seven underserved northwest lower Michigan schools that culminated in a grand finale concert May 9, 2014. The finale took place in front of several hundred friends, family and community members in the historic Traverse City Opera House, located just around the corner from where Lomax made his 1938 Traverse City recordings. 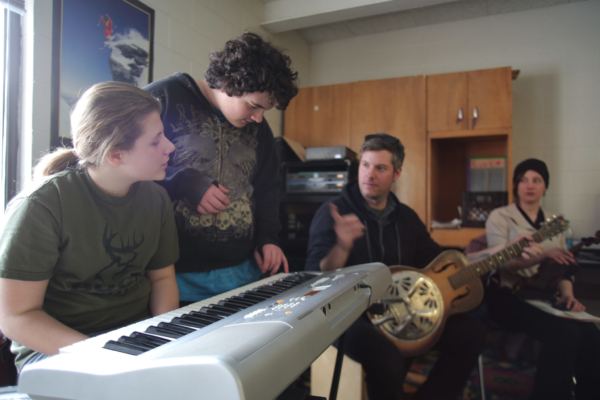 …Throughout the spring, middle and high school students from Benzie Central, Brethren, Forest Area, Frankfort, Kalkaska, Manistee, and Suttons Bay Schools have been preparing for the performance by studying local history, exploring personal journeys, learning songs from the Lomax archives, and writing new material for the concert production.”

Seth Bernard, co-founder of the Earthwork Music Collective and with Josh Davis, co-director of the Quest, explained, “What’s been coming out is music that is true to the times that we live in and also dips into the rich, local cultural heritage.” Bernard selected 15 Lomax Michigan recordings as springboards for collaborative songwriting. He chose songs that represented the geography of Lomax’s journey across Michigan—from Detroit to the western U.P.—and that had connections to the students’ home area.

In the hands of Seth and the eleven other Earthwork musicians who worked with the students, Lomax’s aging recordings inspired collaborative songwriting and the creative process. The musician-educators infused the students with excitement about the mystique of working with a collection that, since it was not yet online and widely available, few people had heard. “It’s like receiving a transmission from someone who was in Michigan years ago, right there in their community,” Seth explained. “And this legend, Alan Lomax, made it possible to participate in the creative process in a new way.” 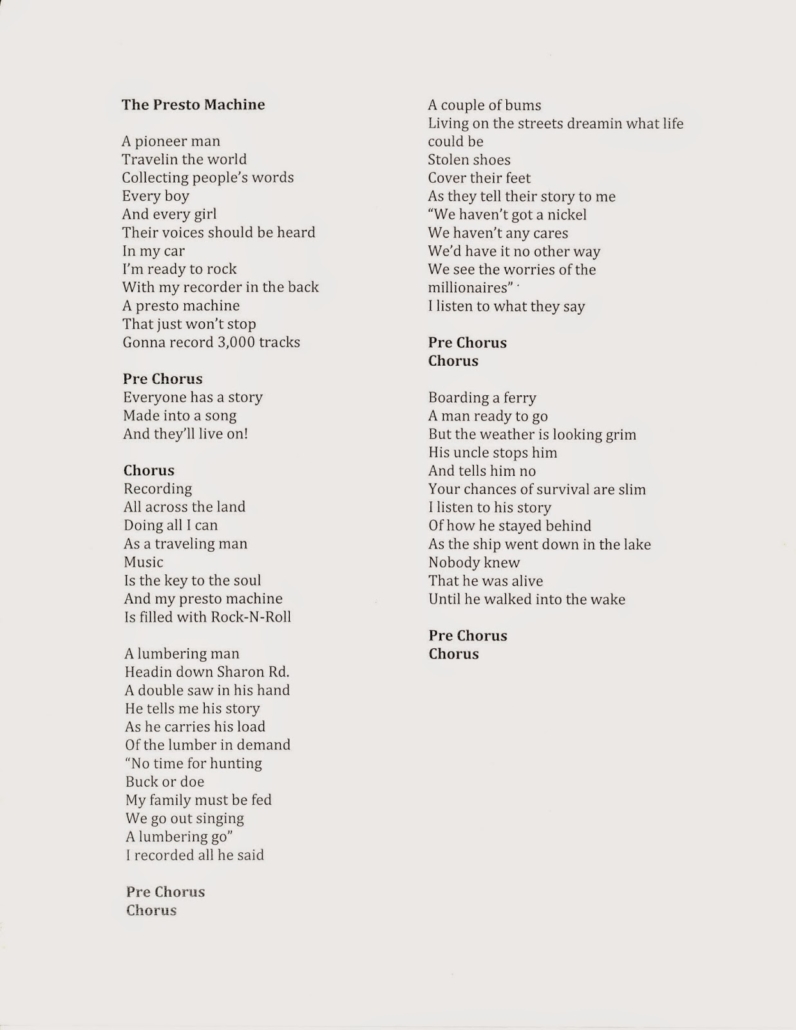 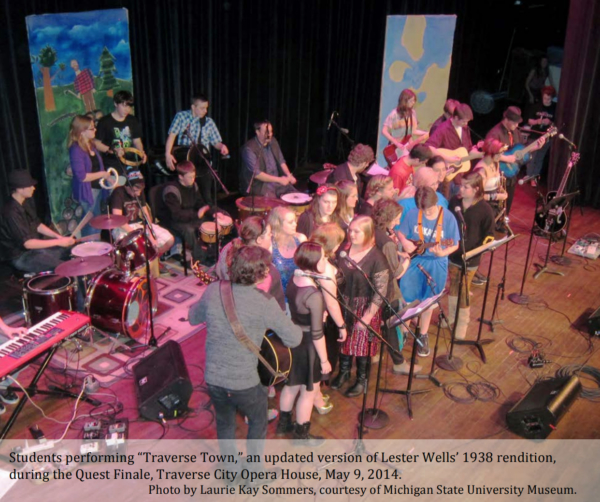