On July 10, 2019, Title Track, in collaboration with William Copeland (aka Will See) of Collective Wisdom Detroit and a network of partners (Earthwork Music, D.Cipher), brought the first annual Earthwork Detroit Music Festival to Detroit. Inspired by the Earthwork Harvest Gathering, this FREE, all-ages, one day happening took place on the Campbell Terrace Stage (Lafayette & St. Aubin) with the goal to celebrate cultural resilience and our local social ecologies. The musical lineup proudly featured notable acts in folk, hip-hop, funk, soul and rock-n-roll. Community leaders addressed the crowd representing a variety of local cultural and organizing efforts. Youth programming was central to the event including a kids concert and interactive workshops throughout the afternoon and evening on topics including songwriting, poetry writing, and permaculture.

The first annual Earthwork Detroit Music Festival was part of a year long commemoration “Black Bottom Lives!” taking place at the Dequindre Cut. We were honored to join in recognizing the historical legacy of community and culture against tremendous odds that Black Bottom has provided for Detroiters.

Workshop leadership was provided by:
Audra Kubat (who works with the DIA and Detroit Public Schools): Songwriting for kids and for adults
The Aadizookaan: Song production
Live Coal Gallery: arts-related activities

Many thanks to the Michigan Film & Digital Media Office and Avalon International Breads for their sponsorship support.

Many thanks to James Boggs Centenary, Hanging Out in the D, and Detroit is Different for being Media/ Publicity partners.

Poster by Will Thomas Design. 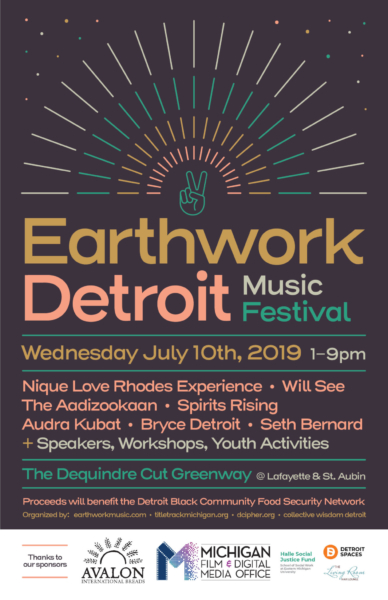